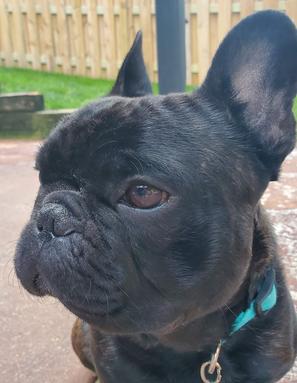 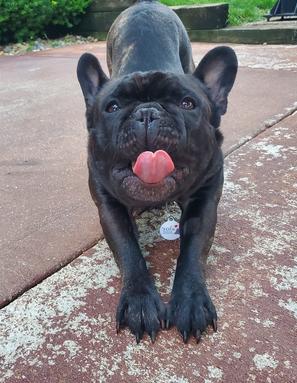 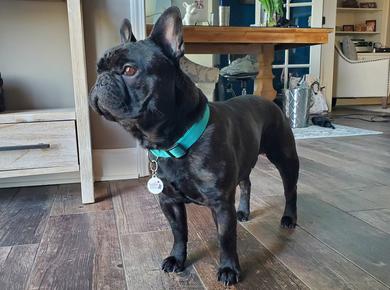 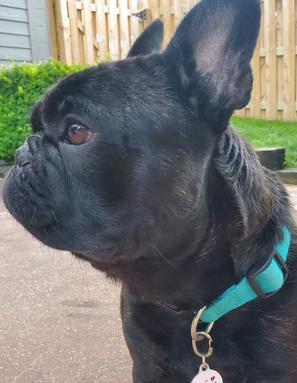 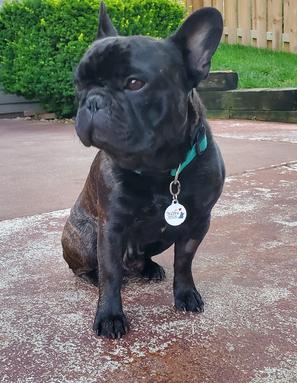 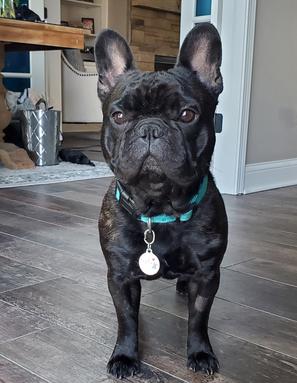 Tito was surrendered to SNAFU Rescue via a private party, he needed to be in a home with no other pets. Tito has a bite history and will require diligent, calm, firm and consistent leadership in his adoptive home.

Tito is a social, energetic, affectionate, attention seeking and outgoing Frenchie who is always up for some playtime!  When Tito isn’t playing tug of war with his favorite rope toy you can find him chasing after any toy that is tossed but has yet to figure out he is supposed to bring it back.  After romping around the house tossing around his toys, Tito will settle in with a raw marrow bone to relax.  One minute he is super playful and the next he is ready to chill.  During his chill time, you can find Tito being extra lazy (typical Frenchie) and will grab a comfy spot on the floor to take a much desired snooze.  He is slow to wake up so giving him space so he isn't startled is recommended. We believe he suffers from sleep startle reflex which can cause a sleeping dog to attempt to bite when startled awake by touch, movement or noise. Tito should be woke slowly and be allowed to adjust to his surroundings when waking up from sleep. He is becoming more and more responsive to many commands, loves encouragement and will do just about anything for a high valued treat!  Tito is currently living with two furry foster siblings his size.  He can be playful with them, can chill with them but can turn on a dime and will escalate a situation when one of them has something he desires or thinks belongs to him.  He has shown aggression specifically around toys and bones (things he views as high value).  Although his aggression seems to be situational and only around other dogs, for Tito’s safety and the safety of others in the home we suggest he is not free-fed and adheres to specific meal times so he understands his humans are his meal source.  Because Tito loves positive attention, can be ultra affectionate and responsive to high-valued treats we believe with the proper structure, a family that can offer firm leadership,  be consistent in their efforts, patient and willing to work on proper dog behaviors we believe Tito’s behavioral issues can be worked through.  In addition, being the only pet will remove triggers Tito has with resource guarding.  He will need to earn privileges (being allowed on couches and beds) and so far has been extremely receptive and his manners are improving.  Tito seems to get along well with every human he meets!  His foster family believes he would be best in a home with dog-savvy, confident/assertive, teenage children or older and in a home as the ONLY pet.  As with all of our dogs, we recommend slow introductions AND supervision around children when introducing a new dog in your home to make sure both he and they are kept safe.

Tito is 100% potty trained.  In order for Tito to continue to be successfully potty trained in his new home his new family must be willing to keep him on a strict schedule (he thrives with structure), be willing to work with him on a signal for potty and offer high valued treats and praise (he loves encouragement).  Tito doesn’t prefer being in the crate but will go in willing if offered one of his favorite snacks.  He does sleep in there when his foster family happens to leave the home for work but will cry out for 10-15 minutes before settling in for a nap.  Due to the anxiety he has while in his crate we believe he should only be crated when his family is away from the home.  Once he earns the privilege of being on a bed we think Tito would love to share his foster families bed at night. Boy, he is a great snuggler!  Again, he seems to have separation anxiety when left alone and for his safety, we recommend that he is only in his crate when his humans are away from the home and a similar crating/sleeping schedule is kept for him.

Medically, Tito seems to be in great health!  He has been neutered, updated on vaccinations/dewormings, microchipped, heartworm tested and has been given a clean bill of health by our veterinarian!  Tito is starting on Prozac to reduce the stress that causes his random outbursts. Tito seems to have some spring/summer allergies.  During this season he could benefit from regular cytopoint shots and a daily Zyrtec (generic).

Tito would do well in a home with a yard, a family that can spend a lot of time with him and being willing to dedicate the time to offer him the proper structure he so desperately desires.  A house with a fenced yard will be preferred for him (opposed to a multiple floor apartment style dwelling) as Tito is still learning to master walking on a leash.  He needs to be the only pet and shared apartment spaces will slow down his ability to grow.  He craves exercise and a large yard to run and play would be the best fit for this playful boy!  Due to his previous history, we do not think (at this time) Tito would make a great office dog HOWEVER with time and obedience training we believe he could be a great office mate (assuming no other office dogs are there).   Tito can sleep the day away in his crate/gated area with a comfy blanket as long as his people can arrange a mid day potty break for him.

Tito, one on one, is a TOTAL sweetheart!  He is ultra affectionate, loves belly rubs and scratchies.  He loves all toys and bones but just doesn't like to share them.  Tito is looking for his forever companion, someone who will be his ride or die!  With the proper discipline, structure, patience and love Tito will thrive into being the best, most loyal friend.

If you feel like your family might be the perfect forever home for Tito, please submit an adoption application for him today!!
​