Teeter found himself at the SNAFU Rescue when a shelter reached out looking for placement.  He was found wandering the streets and the shelter wanted him to find a loving home to live the rest of his life as a cherished and spoiled pet.

Teeter is a happy, outgoing, playful, energetic, active and social English Bulldog. He is always ready to play with his beloved humans and his furry friends.  He has endless enthusiasm when new friends enter the home and doesn’t display any reservations repeatedly asking them for affection.  After being greeted with an appropriate pet, Teeter will immediately sit on the feet of his new best friend, roll over onto his back and demand a belly rub.  When Teeter isn’t burning off some energy outside, you can find him searching for his squeaky plush toys using them to engage his furry foster sibling.  His absolute favorite is his emotional support chicken. Yes you read that correctly!  Teeter will ALWAYS have his chicken in tow wherever he goes.  He will carry it, lay with it, nurse on it, nap with it you name it!  He will graciously share his beloved chicken with his foster siblings.  After a fun play session, Teeter will settle inside for some much needed chill time.  He is such a busy boy but don’t be fooled by his endless activity… he is true to his English Bulldog breed and enjoys a nap on the couch and even will settle in for some TV time!  In between all his activity, he desires the company of his humans.  Nothing makes him happier than his humans participating in all the things he loves and he will reciprocate that affection.  Teeter loves his time with his people.  He will take any pets and scratchies offered, watch his humans every movement as they move about the house and his favorite… snuggle time on the couch!  He will inch up right next to his people for a much needed little snooze.  He thinks he is much smaller than he is!  Teeter is loyal, intelligent, obedient and protective of his humans (not at all in an aggressive manner).  Teeter currently lives with a few furry foster siblings.  He is VERY social, playful and interested in the companionship of other animals.  Teeter is experiencing a big transition and will need leadership and consistent positive reinforcement to help him adjust into his adoptive home.  He seems to get along well with every human he meets but due to his size he can be a bit much around small children if not supervised properly.  Teeter currently resides in a house full of teenage boys and relishes in the attention they offer. He begs for a game of wrestling and Teeter is about the most gentle rough houser there is!  His foster family believes he would be best in a home with dog-savvy, gentle, children or any age and would thrive in a home with another furry, playful companion.  Teeter does have a strong prey drive and will not be placed in a home with small animals such as cats, birds, hamsters etc.  As with all of our dogs, we recommend slow introductions between dogs AND supervision around children when introducing a new dog in your home to make sure both he and they are kept safe.

Teeter is 100% potty trained!  He patiently waits at the door to be let out.  As with all of our dogs, any adopter will need to be able to offer him a consistent schedule to ensure continued success.  Teeter does not favor his crate as he prefers to be with his human at all times. He is trusted in the home to roam and is a perfect gentleman in a dog safe space.  Teeter does sleep (not so quietly oh boy can he snore) in a safe space and oddly will nap in the shower or under tables. For his safety, we recommend a similar arrangement when his people happen to be away from the home.

Medically, Teeter seems to be in great health!  He has been neutered, updated on vaccinations/dewormings, microchipped and has been given a clean bill of health by our veterinarian!

Teeter would do best in a home with a fenced-in yard due to his prey drive,  love for the outdoors, his desire to watch the squirrels/birds and his need to run the backyard (opposed to a multiple floor apartment style dwelling with no yard) (the heat is the only reason Teeter will want to come inside).  He does great with stairs so a multi-level home would be okay for him!  He begs for exercise and a large yard to run and play would be the best fit for this fun-loving boy!  We think he would love to go to the office with his new family as he loves a car ride and craves attention for everyone he meets.  You can’t take him to the office- that is okay!  He would much rather have a stay at home or work from home family member.  If that is not an option, Teeter would prefer companionship from a furry family member while his humans are away from the home.  He desires a family with an active lifestyle of which he can be included and one with a furry companion to play with!  This happy-go-lucky boy is very eager to please, looking for leadership and love.

If you feel like your family might be the perfect forever home for Teeter, please submit an adoption application for him today!! 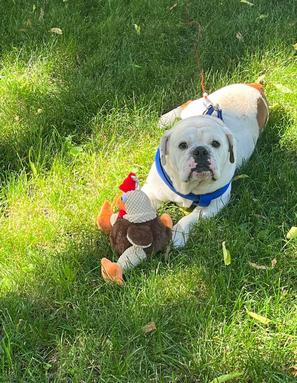 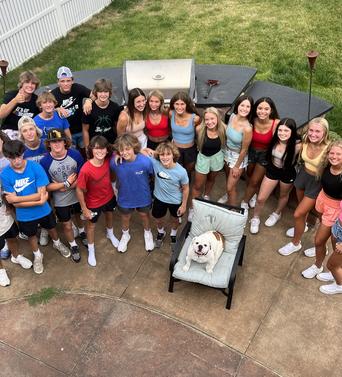 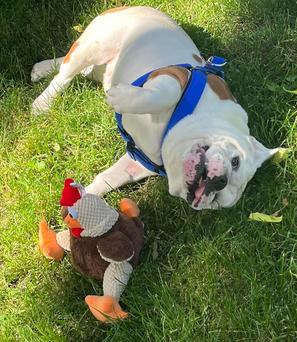 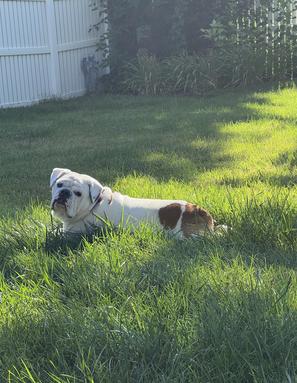 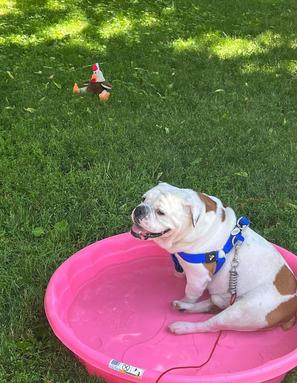 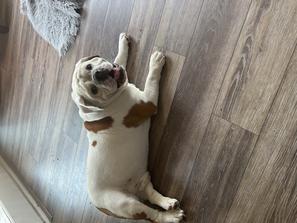