Obie was surrendered to SNAFU Rescue because his family was going through a divorce and were not able to continue caring for him at that time.   Obie has a bite history and will require diligent, calm, firm and consistent leadership with his adoptive family.

Obie is 100% house trained.  He has not had any potty accidents since coming to his foster family's home.   As with any dog, a regular and consistent schedule will help with continuing his potty training success in his new home.  He is also crate trained and will happily go into his crate for a yummy treat.  For his safety, we recommend that he keep a similar crating schedule when his humans are away from the home and/or he is left unsupervised so he is safe and secure.  Obie can also be a little leery around strangers and people he is not comfortable with and/or does not trust.  He has bitten strangers in his former home when they have reached down to pet him.  His foster family typically kennels him with a large nylabone or sturdy chew toy to occupy him when visitors come to the house to ensure their safety and he seems to be just fine with that routine.  Again, this routine would be very strongly encouraged in his adoptive home to ensure that everyone is kept safe when visitors come into the home.

Medically, Obie is in good health. He is on a daily joint supplement to help with his joint preservation as he ages.  Obie came into the rescue very, *very* obese and his front shoulders seemed more painful from the extra weight, which was reflected in his walking swagger.  It is absolutely imperative to his quality of life that his adoptive family monitor his weight very closely.  He needs to remain on the thinner side (needs to have a visible waist!) and his family must not allow him to become overweight again. His foster home uses Dogzymes Phyto Flex fpr his joint supplement, which can most easily be found on smile.amazon.com and/or chewy.com. Obie is neutered, has been HW tested, updated on vaccinations/dewormings, is microchipped, and has been given the all clear for adoption by our veterinarian!

Obie would do best in a home with a securely fenced yard.  Privacy fencing would be ideal as he is leery of strangers and has bitten strangers in the past.  Obie will need a calm and easy going home with no young children under the age of 16 years old present.  He can manage stairs but due to his swagger, he would probably do best in a home with fewer stairs that he would need to manage on a daily basis.   Obie enjoys being outside exploring the backyard and, when the weather is nice, he does enjoy lounging out in the yard sunning himself.  Obie would likely not be a good candidate to take to work due to his insecurities around new people and his bite history with strangers.  However, he's completely happy sleeping the day away at home as long as he has a soft blanket to snuggle in and a large nylabone or two to chew on to keep him occupied between naps.  He would do best if his people can arrange a mid day potty break for him if they are away from the home for more than 6 hours at a time.

If you feel like your family might be the perfect forever home for Obie please fill out an adoption application for him today! 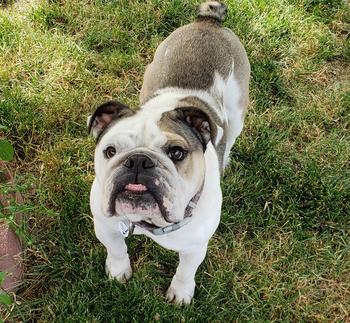 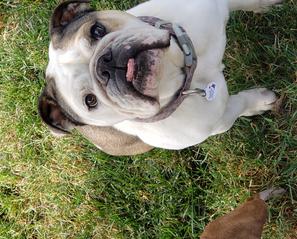 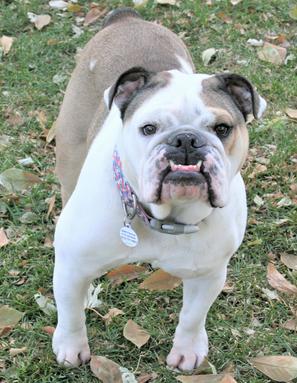 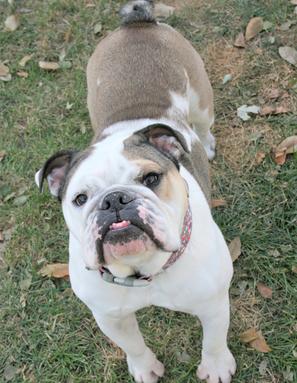 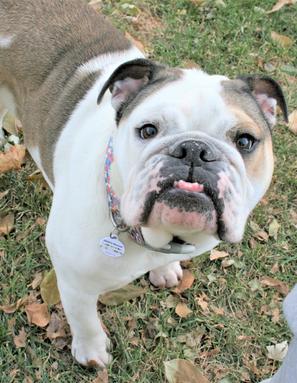 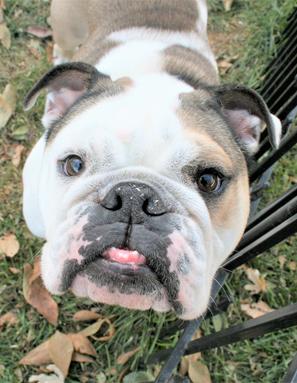 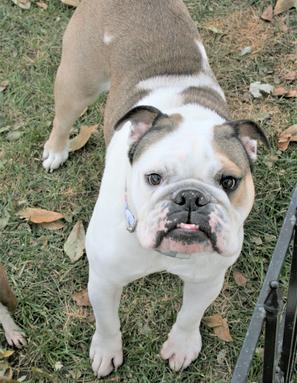