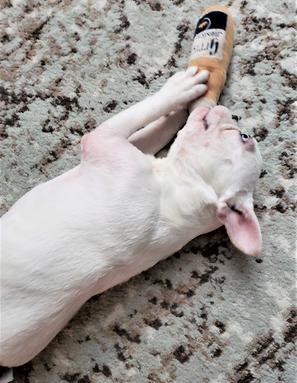 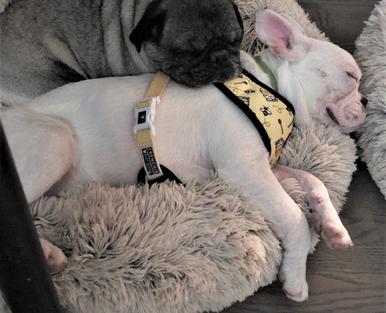 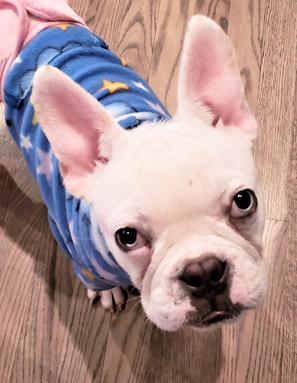 Newman came to SNAFU Rescue after being purchased at a commercial breeder dog auction. Thanks to the help of generous donors we were able to secure Newman and his two brothers.

Newman is very playful and active Frenchie puppy. He loves to run and play but also loves to snuggle and take naps in between play times.  He loves to be held and loves to be anywhere his people are; he loves to follow his people around, in or outside the house.  Be ready for a little shadow dog with him b/c he truly wants to be with or near his people every minute!  He will cry or bark if he can’t see anyone or if he happens to be in his kennel for nap time or bed time and can hear his people still up and about in the house. Newman is a very active puppy and loves to play with other dogs if they are interested, otherwise he is content to grab a toy and run around with it until he is tired out.  He loves chew toys!  He is still very much a puppy and loves to chew, but takes re-direction easily when given a toy to chew on instead of whatever he stole from his human foster brothers room. Newman has shown no problem sharing with other animals or humans in his foster home.  He seems to love everyone he meets and even does very well with gentle children of all ages (under supervision) but he should always supervised when he is around kids, to make sure both he and they are kept safe. He has not been exposed to cats while in foster care, so we will be looking for a home without feline friends for him at this time, to err on the side of caution.

Newman is currently still working on potty training but is getting better every day and has come a long way with learning to potty outside.  He is working on keeping his bed clean, but sometimes when he is excited he forgets.  A regular, consistent schedule will help with his continued potty training in his new home. As with all of our dogs, any adopter will need to be able to and willing to continue working on potty training with him.  Newman is crate trained and does well in his crate after he realizes his people have left or have gone to bed.  Again, he will cry or bark if he can’t see anyone or if he happens to be in his kennel for nap time or bed time and can hear his people still up and about in the house. While he does well in his crate, he mostly prefers to cuddle up to his people or even another dog for nap/bed time if allowed!  Rubbing the back of his neck or picking him up will put him to sleep every time!   Given Newman's age and his propensity to chew on most things, he currently sleeps in his crate at night and when his foster family is away from the home.  For his safety, we recommend that he keep a similar crating schedule when his humans are away from the home and/or he is left unsupervised so he is safe and secure while no one is home.  He does not know danger and must be protected when his humans are not able to supervise him.

Medically, Newman seems to be in great health!  Newman was diagnosed with Demodectic Mange when he first came into SNAFU Rescue. With consistent baths using medicated shampoo (to prevent secondary skin infections) and medication (Nexgard), this is currently being treated and he is now on the road to recovery.He has recently had a negative skin scraping from the vet and has been cleared for adoption!  He has been neutered, heartworm tested, is microchipped and has been updated on vaccinations/dewormings!.

Newman would do well in an active home, where he can run and play and then pass out on a human until he wakes up and can do it all again! Since he is still working on potty training and absolutely LOVES to run and play in his foster families backyard, a house with a fenced yard will be preferred for him (opposed to a multiple floor apartment style dwelling with no yard).  Again, Newman is a vocal dog when he can’t see his humans, and while his foster family has been working on this with him, he still has no issue with voicing his displeasure.  An apartment or a home with shared walls would not be ideal for Newman because of this.  He has mastered stairs, so a home with stairs would be no problem for him.  Leash training is still a work in process.  He has done pretty well on a leash although does get scared sometimes when loud cars go by.   It is a necessity that his adoptive family be willing and able to continue to work with him on potty training and be patient with his voiced displeasure when separated from his people. He is still young and, with reassurance, firm leadership/corrections, training and patience, he should grow out of this.  We also think he'd love to go work with his new family if they wanted to take him with them to the office!  He loves to meet new people!  If his people are not able to take him to work with them, no problem - he's completely happy sleeping the day away in his kennel as long as he has a couple of bones to keep him busy and his people can arrange a couple potty breaks for him throughout the day!

If you feel like your family might be the perfect forever home for Newman, please fill out an adoption application for him today!
​