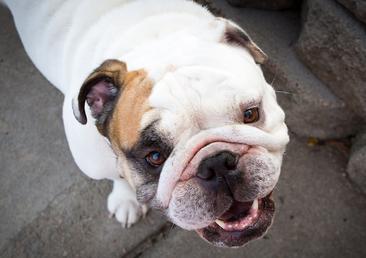 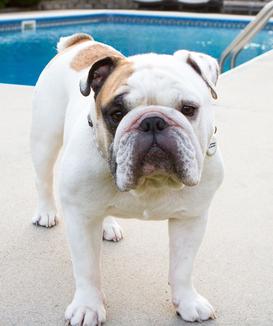 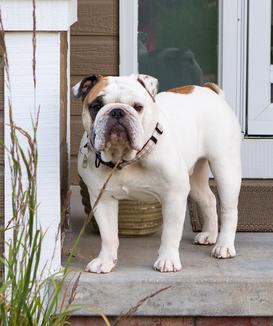 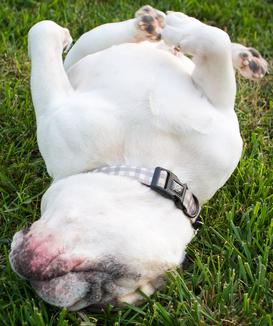 Max came into SNAFU Rescue after being purchased from a rehoming ad on craigslist in order to ensure he found the best home possible as his forever home!  He was reported to have been rehomed a number of times (we do not know specifically why) but last owner was a college student that did not have the time or correct environment to raise Max in.

Max is a big sweetheart. He loves hanging out with people, being the center of attention and getting in on any action going on around the house. He is a lover! If you want to snuggle, Max is your guy. He loves being scratched and getting lots of hugs and kisses. He enjoys greeting new people at the door and he will make sure they see him by "climbing up" to say hi.  Bones, bones and more bones are Max’s favorite toy(s)! He also is a fan of small balls, stuffed animals, pillows (if you aren't careful with your pillows!), dog beds and anything else he can find. He will seek out a hiding spot in a corner or behind a couch and keep his stash there.  Please note that Max does tend to resource guard his stashes and won’t give his "prizes" up easily.  Max doesn’t like to be cornered in his hiding space and can become very possessive and agitated.  This can also be the case if you are wrestling with him with a toy. Max will need a firm, consistent owner in his adoptive home so that he knows he is not the pack leader (his humans are!) and a level of comfort can be established between Max and his owner.  Besides toys, Max enjoys some goofy low-key wrestle mania where he mainly lays on his back and "tries to get you from there”. It’s easy to see that Max enjoys these games but doesn’t always know his limits. Like a typical bulldog, Max also enjoys his down time! Ten solid minutes of play means 3 hours of laying by or on an air vent. He is then rejuvenated and ready for the next round of play.  Max is also great with following you out to do some yard work or hanging out in the garage. He will need to be kept on a leash when he is outside with his people, unless he is confined to a securely fenced area.  Max is protective of his family and his home so intruders such as rabbits, cats, and other dogs are not welcome!  Max has the typical stubborn Bulldog personality down pat. In fact, Max's foster family claims that stubborn is an understatement for Max. When he doesn’t want to do something or go somewhere he won’t. You might get that cute perked ear; tilted head look but his bottom plants to the ground and you must pick him up to move him. Bone toys can be persuasive at times, but small treats are sometimes the only way to get him to go to places he doesn't always prefer to go, his kennel when he knows his family is leaving, is one example.

Max is looking for a home that will not only give him lots of love, but also provide him with a firm, consistent routine and leadership. He can be pushy, rude and dominant with other dogs and has been reported to try and go after cats, so having other animals in the home is not the ideal living environment for Max. He will need a home where he is the only dog and only pet in the household.  If his adoptive family happens to have children, we feel children 8 years and older would be the best fit for him. Max loves playtime but can by pushy with asking for attention and doesn't realize his strength when insisting on being pet.  Children’s toys also must be kept out of reach or Max will think they are his for the chewing. Other than that, this big bear of a dog is in need of a home that can is patient, caring and stable.

Max is 100% potty trained and is kennel trained. He tried to mark his territory the first night at his foster home but hasn’t had any issues since. He will go out when he wants but it may be necessary to put him on a leash and take him out (again, this could be a time where you see his stubbornness come out) and show him where to potty. His current morning routine is wake up, eat, leash potty and back inside. Then throughout the day will do his deeds when needed. He will let you know if he needs to go out by sitting by the back door. As with all dogs, a regular and consistent schedule will help with his continued potty training success in his new home!   Max has also done great with crate training with a wire crate and sleeps quietly in his kennel during the night or when his foster family happens to leave the home.  He is not a huge fan of blankets in his kennel and he mainly pushes them to the side and opts for the cool plastic base. We strongly recommend kenneling him during when his family is away from/out the home. Max will find and destroy things that he feels are fun to chew on (pillows, stuffed animals, blankets, etc.). He has been known to even climb up on furniture and try to take things that are not for doggies to chew on. Again, for his safety, we strongly recommend that he keep a similar crating schedule when his humans are away from the home and/or he is left unsupervised so he is safe and secure while no one is home.

Medically, Max seems to be in great health!  Max had a very bad ear infection when he got to his foster home. His ears were basically swollen shut, to the point where you could barely touch his ears and he couldn’t hear very well. Since then his ear infection has been treated and cleared and his ears and hearing are much better!  His ears will need to continue to be monitored and cleaned regularly in his adoptive home to help avoid future ear infections.  Max does have a runny nose most mornings and a lot of mucus build up and may benefit from daily antihistamines for allergies.  When Max was vetted and neutered the vet discovered his smaller than normal sized esophagus when they put him under.  Some mornings the mucus build up is enough to make him spit up a bit, but he is fine afterwards. He is a snorer and his foster family believes he could compete in the loudest snorer contest and possibly win!   Since coming to his foster family, Max has lost some much-needed weight.  It is very important to keep Max’s weight under control to help with his breathing and mucus inflammation. His foster family has been working very very diligently in order to get him down to a healthy and acceptable weight and, so far, he is doing much better as far as energy levels (walks and play time). His adoptive family will absolutely need to be VERY diligent about monitoring his food intake and his weight.  Having excessive weight to carry around is very hard on dogs, and is especially hard on Bulldogs.  His foster family has been taking him on short daily walks, closely monitoring his food intake, and making sure he has plenty of play time throughout the day to burn some calories. He really seems to enjoy going on walks and, at first, he could only make it one block but is now up to three blocks!  He will need to continue to maintain a healthy weigh so that he is able to continue to be a bit more active without struggling to catch his breath so quickly, which will result in him being a much happier and healthier boy in many different aspects, especially as he ages. His current walking routine is early morning or late evening when the weather is nice and cool. Obese dogs have a lot more issues with heart problems, arthritis, joint issues, etc, so this is why we just can not stress enough how important it is for his adoptive family to be very diligent with monitoring and maintaining him at a healthy weight!

Max would do well in almost any type of home as long as he were an only pet in the household. He doesn't have any issues with potty training and/or pottying on a leash, but a house with a fenced yard will still be preferred for him but is not a requirement for adoption.  He seems to do stairs pretty well, so a home with stairs will be just fine for him. Keep in mind that stairs will also be easier for him to manage as he ages if he maintains a healthy weight!  We also think he'd be fine going to work with his new family as long as it was a quiet, calm and easy going work environment and he had his own secure space to hang out in (securely separated from other dogs or animals in the office if any happened to be present).  If his people are not able to take him to work with them, no problem - he's completely happy sleeping the day away in his kennel with a Nylabone to chew on as long as his people can arrange a mid day potty break for him!

If you feel like your family might be the perfect forever home for Max, please submit an adoption application for him today!!!

NOTE: Please note that it may be at LEAST a 3-4 week *minimum* before you hear back from us after submitting an adoption application.  We typically give a week for a "grace period" for new applications to come in on any newly available dog in order to give everyone a fair chance to submit an application.  After that time period, the applications are sent on to the foster family for review and that usually takes from at *least* a few days to a week to sort through the applications, etc.  :-)  Most of our dogs receive several applications so this process does take some time, especially on dogs who are more popular for one reason or another.  We do require phone interviews to be conducted between the foster family and potential adopters, vet reference checks and a home visit to be conducted for all potential adopters, if they are selected as the top choice applicant, which will also take time to complete.   That being said, we do always let our applicants know if they are chosen or not. :-)

ALL adopters are required to come and pick up their adopted dogs in person from the dog's foster home (we do not ship any of our dogs). Please have road/driving transport plans in place to pick up an adopted dog before you apply!  While we are not against adopters flying a foster dog in cabin on a commercial flight, please keep in mind that many are not good candidates for flying due to size and/or being a brachycephalic/short nosed breed.  If, for any reason, and adopter can not keep one of our grads, for any reason at all, at ANY point in time, they *must* be willing and able to return their adopted dog to his/her original foster home, despite distance and any costs that would be required to do so. 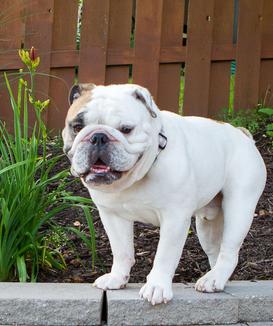