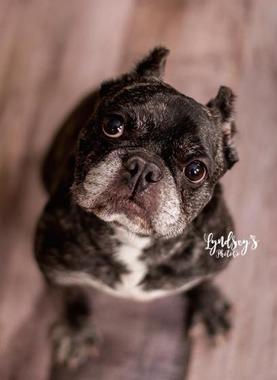 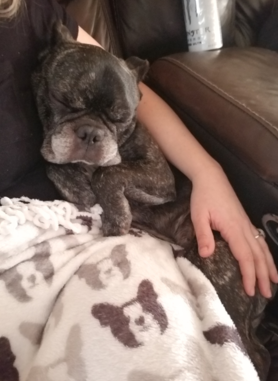 Henry's applications are currently under review.
We are no longer accepting new applications for him at this time. 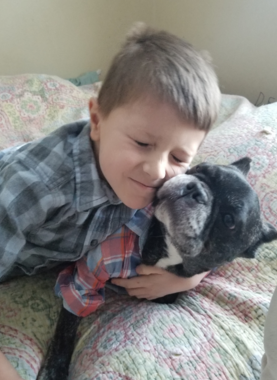 Henry was found via Craigslist and made his way into SNAFU Rescue!

Henry is a sweet, snuggly, lazy, go-with-the-flow man. Be ready for lots of snuggles with this guy! Henry loves car rides and really enjoys a good 'Frenchie Find' shopping trip to his local TJ Maxx/Marshall's/Home Goods!  Henry is a very well-behaved, sweetheart who loves to explore! He seems to get along well with every human he meets, and has done really well with the other Frenchies and Golden Retriever in his foster home as well as his "foster cousin" who visits often. He has also been tested with cats, and doesn't seem to care about their presence so a home with cats, would be fine for him too.  Henry does startle easily at loud noises or sudden movements, but doesn't hide or shy away when he's startled.  He recovers quickly once he sees no one else is scared!  Henry demands attention when he wants it! He will stand and stare at his foster dad or human foster brothers and bark until they come over to pet him at which time he relaxes and snuggles up! Henry loves to roughhouse with his Frenchie foster brother Mike and he loves when his four human foster brothers let him sleep in their laps. Henry is very patient with his Frenchie puppy foster brother and has never gotten "sassy" or snappy when his little foster brother plays a little rough. A vet tech at his vet clinic even told his foster mom that she thinks he may be the best behaved dog they currently see! They were always surprised at how mellow and easy going he was with his ear checks!

Henry does very well with potty training! While he has been doing wonderfully with going potty outside and asking to go out by standing at the door and eyeballing his foster parents when he needs to go out, a regular and consistent schedule will help with continued success with the potty training process in his new home.  As with all of our dogs, any adopter will need to be able to and willing to continue working on potty training with him. He has also done great with crate training and sleeps quietly in his kennel during the night (he prefers the comforts of sleeping in bed with his people!) or when his foster family happens to leave the home.  For his safety, we recommend that he keep a similar crating schedule when his humans are away from the home and/or he is left unsupervised so he is safe and secure while no one is home.  He is very curious and loves to explore when he's not napping. He WILL get into things if he is left unsupervised.  He does not know danger and is still learning what is expected of him inside the home.

Medically, Henry seems to be in great health!  He has been neutered, updated on vaccinations, dewormings, had a dental and has been given a clean bill of health by our veterinarian! Henry does have a permanent head tilt. He was treated for an ear infection when he first came into SNAFU Rescue, but the tilt has persisted and has not gone away despite treatment of his past ear infection. After two more rounds of medication, our vet was able to see that his eardrums were clear of any infection and has determined his head tilt is not resulting from any current ear issues. Henry doesn't have any neurological symptoms other than the tilt and his blood work came back normal. IF his forever family would like to further investigate the tilt, a neurological consult, CT or MRI scan of his head can certainly be done at his adoptive owners expense. Our vet is confident he is healthy as can be and is just a silly guy!

Henry would do well in almost any type of home, but a house with a fenced yard will be preferred for him (opposed to a multiple floor apartment style dwelling with no yard - he loves to have space to run and play!).  He does do very well with stairs and they do not seem to phase him one bit!  We also think he'd love to go work with his new family if they wanted to take him with them to the office! He loves to meet new people!  If Henry's people are not able to take him to work with them, no problem - he's completely happy sleeping the day away in his kennel with a Nylabone or two to keep him busy, as long as his people can arrange a mid day potty break for him!  Again, he is a very mellow, laid back, cuddly Frenchie. He loves to watch the world outside the living room windows, explore the house, investigate what his people might be doing and does love to bounce around the yard outside for little bits at a time, so he does have a playful side when he's not being lazy sleeping or snuggling!  Be ready for a loving, lazy, curious, happy, snuggle buddy if you apply for him!

If you feel like your family might be the perfect forever home for Henry, please submit an adoption application for him today!! 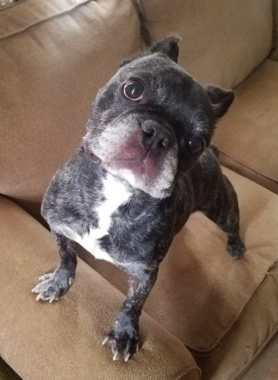 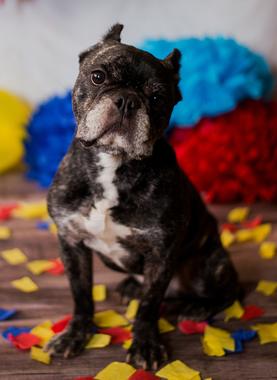 NOTE: Please note that it will likely be a 2-3 week minimum before you hear back from us after submitting an adoption application.  We typically give a week for a "grace period" for new applications to come in on any newly available dog in order to give everyone a fair chance to submit an application.  After that time period, the applications are sent on to the foster family for review and that usually takes from at *least* a few days to a week to sort through the applications, etc.  :-)  Most of our dogs receive several applications so this process does take some time, especially on dogs who are more popular for one reason or another.  We do require phone interviews to be conducted between the foster family and potential adopters, vet reference checks and a home visit to be conducted for all potential adopters, if they are selected as the top choice applicant, which will also take time to complete.   That being said, we do always let our applicants know if they are chosen or not. :-)

ALL adopters are required to come and pick up their adopted dogs in person from the dog's foster home (we do not ship any of our dogs). Please have road/driving transport plans in place to pick up an adopted dog before you apply!  While we are not against adopters flying a foster dog in cabin on a commercial flight, please keep in mind that many are not good candidates for flying due to size and/or being a brachycephalic/short nosed breed.  ​If, for any reason, and adopter can not keep one of our grads, for any reason at all, at ANY point in time, they *must* be willing and able to return their adopted dog to his/her original foster home, despite distance and any costs that would be required to do so. 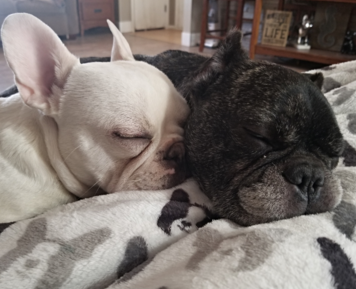