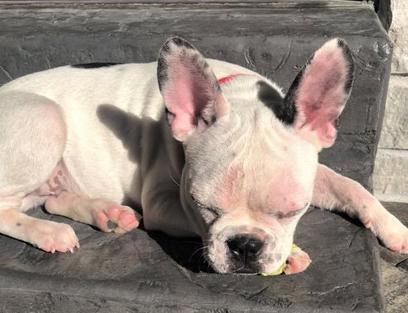 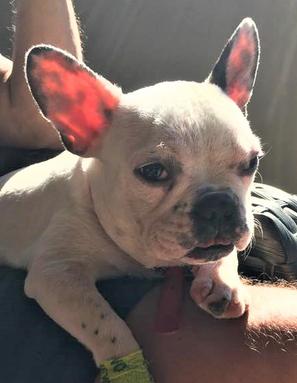 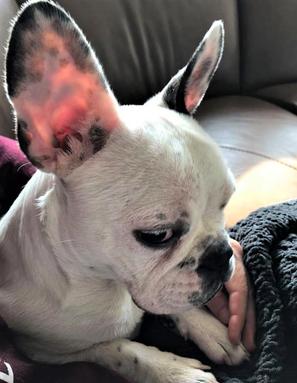 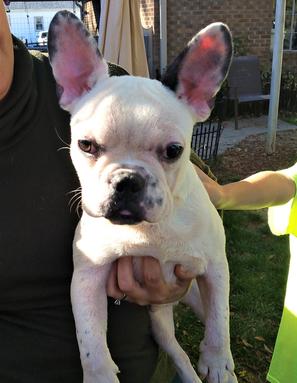 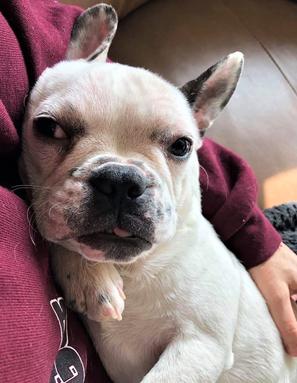 Henderson came to SNAFU Rescue after being purchased at a commercial breeder dog auction. Thanks to the help of generous donors we were able to secure Henderson and his two brothers.

Henderson is very playful and active Frenchie puppy. He loves to run and play but also loves to snuggle and take naps in between play times.  He loves to be held and loves to be anywhere his people are; he loves to follow his people around, in or outside the house.  Some of his favorite things are chewing on bones, playing with his toys, running in the yard, watching TV with his people, and playing with the other dog in his foster home - they love to run, wrestle and play!  Henderson's foster family reports that he has been very easy to care for - he learned quickly when it is time to eat, potty and take naps!  When he’s not napping, he is looking for something to do or something new to explore!  His foster family says that while he can be ornery (as puppies typically are!), he does listen well to stern orders and always comes when called. Henderson seems to love everyone he meets and even does very well with gentle children of all ages (under supervision) but he should always supervised when he is around kids, to make sure both he and they are kept safe. He has not been exposed to cats while in foster care, so we will be looking for a home without feline friends for him at this time, to err on the side of caution.

Henderson is currently still working on potty training. While he has been doing really well with going potty outside, a regular and consistent schedule will help with his continued potty training in his new home. His foster family makes sure to take him out immediately after he wakes up from puppy naps and 30 minutes after eating, and then he goes out every few hours when they are home. They report he has been very good as long as he goes out routinely. He loves to be outside but his foster family typically goes out with him to ensure he potties and highly rewards him when he does. As with all of our dogs, any adopter will need to be able to and willing to continue working on potty training with him.  Henderson is crate trained and does great in his crate, he currently sleeps in his crate at night (very rarely makes a peep) and when his foster family is away from the home. Once you get home he is overjoyed to see you!  He is very comfortable with his crate and will go in his crate with his favorite chew bone, and will also go in to just take naps when his foster family is home.  For his safety, we recommend that he keep a similar crating schedule when his humans are away from the home and/or he is left unsupervised so he is safe and secure while no one is home. He does not know danger and is still learning what is expected of him inside the home.

Medically, Henderson seems to be in great health!  Henderson was diagnosed with Demodectic Mange when he first came into SNAFU Rescue. With consistent baths using medicated shampoo (to prevent secondary skin infections) and medication (Nexgard), this is currently being treated and he is now on the road to recovery. He has recently had a negative skin scraping from the vet and has been cleared for adoption! Henderson also had to have a broken toe nail removed when he went under for his neuter.  The vet reports he should have no issues with missing this nail and it may grow back with time.  He has been neutered, heartworm tested, is microchipped and has been updated on vaccinations/dewormings!

Henderson would do well in almost any type of home but since he is still working on potty training and absolutely LOVES to run and play in his foster families backyard, a house with a fenced yard will be preferred for him (opposed to a multiple floor apartment style dwelling with no yard).  We also think he'd love to go work with his new family if they wanted to take him with them to the office!  He loves to meet new people!  If his people are not able to take him to work with them, no problem - he's completely happy sleeping the day away in his kennel as long as he has a couple of bones to keep him busy and his people can arrange a couple potty breaks for him throughout the day!

Henderson is a very sweet boy and if you are looking for a puppy that wants all your attention then Henderson is it.  However, please be prepared for the needs and care requirements of an active, ornery, puppy if you apply for him!

If you feel like your family might be the perfect forever home for Henderson, please submit an adoption application for him today!!