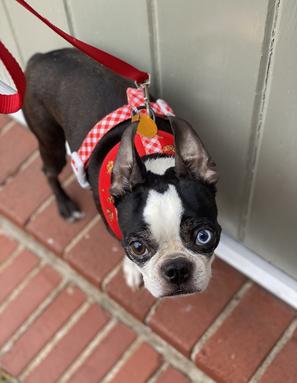 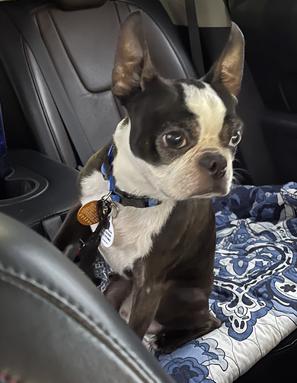 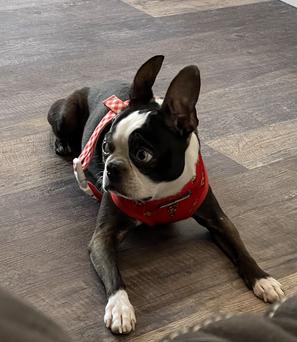 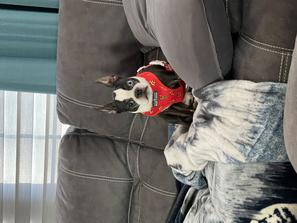 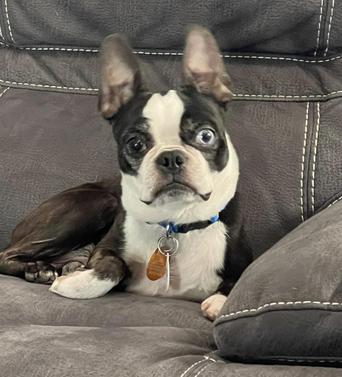 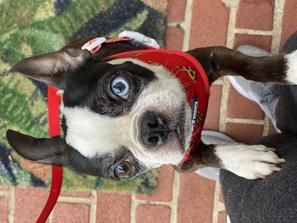 Freddy was surrendered to SNAFU Rescue via a private party. His owner fell ill and wanted the very best for her best friend.  She wanted him to be placed in a loving pet home and to live his retirement years as a loved and cherished pet.

Freddy is a super senior with an outgoing personality who loves time outdoors, soft beds, blankets, napping on the couch, bouncing around with his beloved toys, and napping on his comfy dog bed (yes we said napping twice!).  Freddy can play tug-of-war for hours!  He really has an affinity for all toys, especially those that crinkle or squeak.  Freddy is the ultimate couch potato but don’t be fooled by his age as he is young at heart! Freddy is a balanced, overall calm, easy-going dog that can take a bit to get settled into a new environment.  He has spurts of energy but really enjoys more of a laidback lifestyle.  Freddy has a very sweet, loving disposition and just wants to be adored and surrounded by some peace and quiet. He can often be found cuddling on the couch with his foster family, hanging peacefully with his furry foster siblings catching up on his favorite TV shows.  Most of the day he would much rather settle in for a quick snooze than engage with his furry friends.  He currently lives with several furry foster siblings and enjoys their company overall but can scare quite easily when they invade his personal space (not in an aggressive manner at all!).   Freddy’s mature personality doesn’t allow him to waste time and energy on being child-like.  He is experiencing a big change and will need a patient and understanding family that is willing to offer him the space he needs to develop into a pet life and to learn what is expected of him in the home. Freddy seems to get along well with every human he meets (big or small) and has done very well with every other dog he meets. As mentioned, he doesn’t initiate or instigate any engagement with his furry friends but easily can cohabitate with them!  Freddy would do great in a home with any type of dog as long as they offered him the personal space he requires and would also enjoy being an only pet.  He does GREAT around older children and because of that we feel he would rather be in a calm environment. Freddy would do best with older children who are calm, gentle and dog savvy or in a home with no children at all. As with all of our dogs, slow introductions to both other dogs and children are must to ensure everyone is kept safe.

Freddy is doing amazingly well with potty training. He was initially marking but with neutering, his marking behavior has tapered back a lot!  He has been nearly accident-free in his foster home because he is kept on a consistent outside schedule.  His adoptive family will need to be willing and able to keep him on a regular and consistent schedule for his continued potty training success.  He has also done great with crate training and sleeps quietly in his crate when his foster family happens to leave the home. Given Freddy loves warm soft comfy spots, he would love nothing more than to have his crate appointed with a soft crate pad and blanket. For his safety, we recommend that he keep a similar crating schedule when his humans are away from the home and/or he is left unsupervised so he is safe and secure while no one is home. He does not know danger and is still learning what is expected of him inside the home.  Since Freddy is such a cuddle bug and currently shares his foster families bed a night (adorably tucking himself in under the covers) we know he would love to continue to share a human bed with his adoptive family (he politely requests this is mandatory!).

Medically, Freddy seems to be in good health.  He has been neutered, updated on vaccinations/dewormings, heartworm tested, is microchipped and has been given the ok for adoption by our veterinarian.

Freddy would do well in almost any type of home but a house with a fenced yard with little to no stairs will be preferred for him (opposed to a multiple floor apartment style dwelling with many stairs).  He really loves the outdoors and gets so excited and  runs around exploring every inch of the yard!!  Wooden stairs pose a challenge for Freddy but he does better with carpeted stairs. He can easily navigate carpeted stairs but requests a pair of loving arms to carry him up and down the scary wooden ones!  Freddy is enjoying his retirement years and would prefer a quiet and relaxed family that also may be slowing their ways down.  We think he'd love to go to work with his new family as Freddy loves to be around his people as long the office environment is quiet.  You are not able to take him to work- not a problem!  He would rather have a stay at home/work from home family member as he much enjoys the comfort of his space and bed at home.  Freddy is a Benjamin Buttons in a dog form! He is nearing 10 years old and doesn’t act like it at all!  He had a big life change and has proven to be VERY resilient and adaptable. Freddy is ready to find his forever home so that he can be king of the couch offering his forever family love and kisses!

Freddy is a super sweet boy who is slowing down his lifestyle and is looking for a family to call his very own to spend his golden years with and to be spoiled rotten!  Ready for unlimited naps, evenings on the couch catching up on a favorite Netflix series or when feeling spunky, playing an unlimited game of tug-of-war…look no further!  Freddy is your boy!

If you feel like your family might be the perfect forever home for Freddy, please submit an adoption application for him today!!