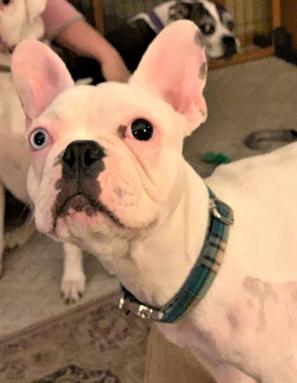 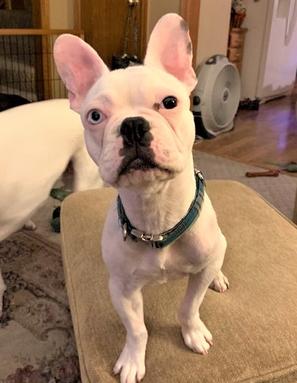 Frank came into SNAFU Rescue via private party in order to ensure he found the best home possible as his forever home!

Frank has been a great little foster puppy, his foster family reports!  He is a very happy, energetic, outgoing typical Frenchie puppy.  Be ready for playtime, walks and outside/backyard play time with this guy because he is not a typical couch potato French Bulldog!  He also loves to investigate what his people might be doing and is always looking for something new to play with or chew on. He absolutely loves to play with the other dogs in his foster home and they play for hours! He also tries to engage the cats in play as well. If potential adopters have a cat, it needs to be dog savvy - if the cat runs he will chase. Frank also loves toys and can entertain himself if need be.  He is still a puppy so still has a lot of puppy ornery-ness and exuberance that he's ready to share with his new family!  He loves everyone and will jump right up in your lap.  He does well with gentle children,under supervision but he should always supervised when he is around kids, to make sure both he and they are kept safe.

Frank is deaf but he is doing well responding to hand signals, and “listens” as good as other Frenchies that can hear!  Frank likes to know where you are and gets nervous and barks if he can’t see you.  He often looks for the expression on your face for direction. Frank takes queues from the other dogs in his foster home and will likely do best in a home with another dog (who can hear) to help be his guide that he can continue to take queues from.  Frank is a lover and his favorite place is anywhere you are, preferably your lap.

Being a puppy Frank is currently still working on potty training but is doing well! While he has been doing wonderfully with going potty outside, a regular and consistent schedule will help with his continued potty training in his new home. As with all of our dogs, any adopter will need to be able to and willing to continue working on potty training with him.  He generally barks and whines initially when first being put in his crate. He will settle down though after a few minutes and sleeps quietly at night. His foster family has his crate in their room so he can see them while crated at night, which seems to help settle him significantly.  For his safety, we recommend that he keep on a similar crating schedule when his humans are away from the home and/or he is left unsupervised so he is safe and secure.  He does not know danger and must be protected when his humans are not able to supervise him.

Medically Frank is in good health and has no currently known health issues.  Frank had surgery to repair a previous injury (broken bone) to his elbow that occurred prior to him coming into the rescue.  His elbow now has pins and screws in it from the repair which causes a slight limp (which is greatly improved to him barely using the leg before his corrective surgery took place). He might always have a slight limp due to the injury not being treated immediately prior to coming into rescue.  Now that he has healed from his surgery, he is still *very* active, is not in pain and his leg does not seem to slow him down one bit!  His orthopedic surgeon recommends that he be on a joint supplement such as Dogzymes Phyto-Flex for the remainder of his life to help with the arthritis that will eventually occur as he ages.  He has been neutered, is UTD on all of his vaccinations/deworming and has been cleared by our vet for adoption!

Frank would do well in almost any type of home but since he is deaf and still working on potty training, a house with a fenced yard will be preferred for him (opposed to a multiple floor apartment style dwelling with no yard). He does very well with stairs and they do not phase him one bit!   We also think he would love to go work with his new family if they wanted to take him with them to the office! He loves to meet new people! If his people are not able to take him to work with them, no problem – he is completely happy spending the day in his kennel with a good chew toy as long as his people can arrange a mid day potty break for him!

Again, Frank is very energetic, active, playful, inquisitive Frenchie puppy! Please be prepared for the needs and care requirements of an active, ornery, puppy if you apply for him!

If you feel like your family might be the perfect forever home for Frank please fill out an adoption application for him today! 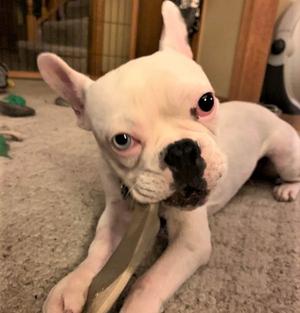 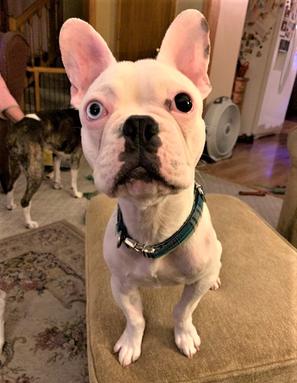 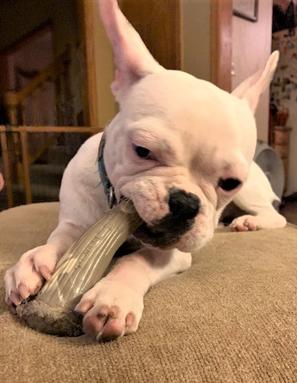 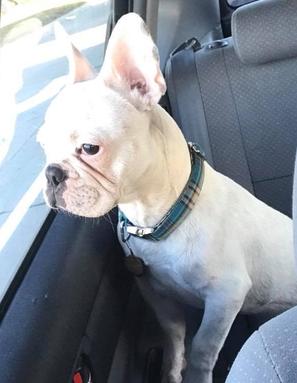