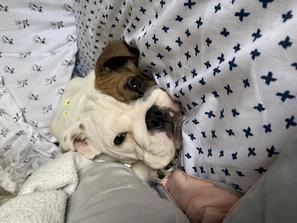 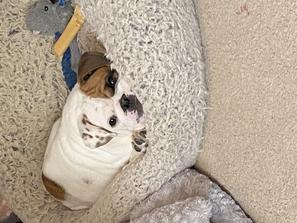 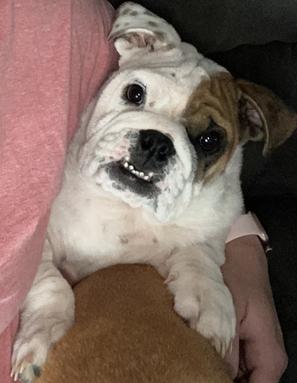 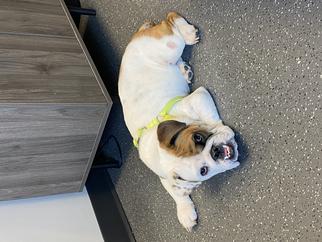 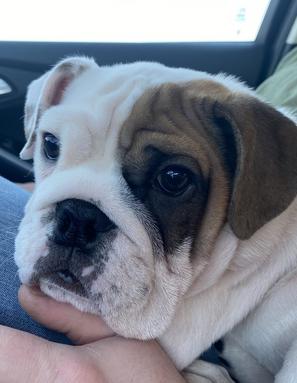 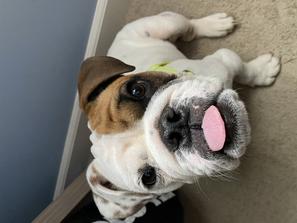 Cliff was surrendered to SNAFU Rescue via a breeder release.  His breeder wanted him to receive the best medical care, the best chance at overcoming his disabilities and to be placed in a loving home to be spoiled and to live out his life as happy as he can be!

Cliff is a sweet, silly, stubborn, playful English Bulldog who is 100% puppy all the time! Despite his visible deformities, Cliff is your typical spunky puppy.   He truly is the perfect balance of active and laidback.  He is a overly social, super chill, very excitable and an adorably happy bulldog who loves nothing more than to snuggle his people and play all day with his furry friends. He has a very loving, goofy disposition and will protect you from his arch nemesis, the evil vacuum cleaner! Cliff prefers the company of his people but also doesn’t mind resting within earshot of his humans. When Cliff isn’t taking one of his dozen naps throughout the day, he enjoys snacking on his favorite treats and going on car rides with his beloved humans. He often engages in a game of tug of war or gentle wrestling with his foster sisters even when they are not in the mood. His furry friends just cannot refuse his persistence!  Cliff is such a heartbreaker as ALL the girls swoon over him!  After being worn out from a wrestling session, Cliff can be found enjoying a snooze on the deck in the warmth of the sun (sunning his adorable buns), catching some  zzz’s in his soft, snuggly bed or even better, napping in the comfort of his human’s lap. If napping isn’t on the menu, he will curl up in his fluffy bed with a Nylabone and chew away.  We feel Cliff would do best in a home with other balanced dogs as he emulates their behavior (both good and bad). Cliff has done well with every dog he has ever met (big, small, boy or girl ). He would thrive in a home with other dogs who will show him the ropes and enjoy a little brother sidekick to share in trouble making and mischief! Cliff loves all humans… every single human! He has done very well with visiting his foster families nieces and nephews who are 5 and older. He especially dotes on a 12 year old niece who visits and bonded with her rather quickly. We did mention the girls love him right??? However, given his playful nature and tendency to puppy nibble on fingers and view them as tasty chew toys, he would do best in a home with children 8 years or older, gentle and dog savvy enough to help correct this unwanted behavior.  Cliff is in need of some basic puppy training and since he is food motivated we believe he will be a quick study!


Cliff is doing well with potty training and his foster family reports he is about 75% trained. He quickly picked up going outside as he mimicked the other dogs in the home.  Cliff does not yet have a signal for potty and is desperately in need of one. As with all of our dogs, any adopter will need to be able to and willing to continue to work with him on potty training, offer him a consistent schedule and work with him on a signal for potty. Cliff does have accidents if left unsupervised in the home (even just for a few moments and occasionally in his crate). Cliff is still learning the limits of his bladder and his adoptive family should also be mindful of his water intake before crating him. Cliff is crate trained and highly treat motivated. He eats his meals in his crate or as he knows it, “his house” and quietly sleeps in there throughout the night or when his foster family is away from the home with zero issues. Cliff is rewarded with treats for entering his crate and we recommend that his adoptive family continue a similar crating schedule for his own safety as he doesn’t know danger.


Medically, Cliff has a few special needs. Cliff was born with severe hip and elbow dysplasia in addition to scoliosis. Cliff had surgery earlier this year to complete an FHO (femoral head ostectomy) to correct his hip dysplasia. Cliff will still live with elbow dysplasia lifelong. There are very few viable treatment options for him and his quality of life is not impacted by his elbow dysplasia at this time. Our orthopedic surgeon feels that a difficult and painful surgery offers a non-promise of improved comfort and function with 60%+ risk of failure / complications.  The risk here is not worth the reward. Cliff has never known any different and doesn’t let his funny gait get in the way of anything or slow him down one bit! Because of his differnt shape, it's IMPERATIVE that Cliff maintain a healthy weight and not ever be allowed to become overweight. The extra stress on his joints would be detrimental to Cliff's health. His adoptive family should also expect that Cliff will need lifelong joint supplements, high quality dog food and likely, chiropractic care throughout his life to help prevent arthritis. Cliff has been neutered, updated on vaccinations/deworming, is microchipped and has been given the okay for adoption by our veterinarian and orthopedic surgeon.


Cliff would do best in a home with VERY few steps and a fenced back yard (opposed to a multiple floor apartment style) because of potential joint issues as he ages. His foster family reports that Cliff has very little trouble getting up a few stairs to the deck and to the couch/bed using doggy steps. Cliff is an energetic, active, very playful bulldog who loves to play, run all around the yard, explore and investigate his surroundings.  Cliff is a really fun, sweet dog that has some quirks (don’t we all??) He loves to play really hard and loves even harder. Overall, Cliff is a big goof who offers tons of daily belly laughs.  When Cliff has exerted all his energy, he is looking for a family that loves a goof snuggle, one that has the time to spend with him offering all of his favorite activities and a bonus... one with several family memebrs to dote on him.  We think he’d love to go to work with his new family as Cliff enjoys a car ride, prefers being around his people and has yet to meet a stranger that hasn’t fallen head over paws for him.  Cliff desperately wants a life of adventure and being the center of his family’s world! He is an affectionate, loving Bulldog looking for someone to spoil him with all the attention he deserves!  He will be more than happy to return all the love he is offered.


If you feel like your family might be the perfect forever home for Cliff, please submit an adoption application for him today!!